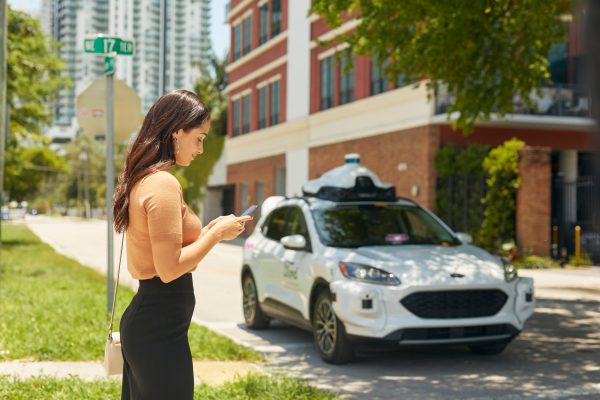 Ride-hailing giant Lyft and autonomous vehicle technology company Argo AI are now officially offering public robotaxi service in Austin, Texas. This is the second city in which Lyft and Argo are operating a commercial robotaxi service after Miami, which launched in December.

Riders in Austin will have the option of choosing a driverless commute directly in the Lyft app for the same price as a normal Lyft ride, the company said Thursday in a blog post. The app will enable customers to unlock the vehicle’s doors, start the ride and contact customer support. That might feel weird at first, especially since there will actually be two humans sitting in the driver’s and passenger seats to monitor the ride for safety reasons.

The news of an Austin launch is certainly expected from Lyft and Argo — the companies, along with Argo backer and customer Ford, previously announced a plan to launch at least 1,000 self-driving vehicles Lyft’s network in a number of cities over the next five years, starting with Austin and Miami. But the launch has likely been kicked into high gear ever since top competitor Cruise revealed plans to launch its own driverless ridehail service in Austin before the year is out. Cruise is also pursuing a launch in Phoenix, Arizona, where Waymo has set up driverless robotaxi and delivery operations, as it scales in an effort to grow revenue.

Lyft and Argo have largely steered clear of Cruise’s home base, San Francisco, where other competitors like Waymo and Zoox have focused operations, and where Cruise launched a fully driverless commercial ridehail service this summer. Instead, the companies have homed in on other U.S. cities with fewer competition and more favorable regulatory environments.

The companies aren’t sharing the hours of operation in Austin yet, but an Argo spokesperson said its fleet of an unspecified number of Ford Escape hybrids would be operating during “daytime hours.” Argo and Lyft also wouldn’t detail when they expect to remove the safety driver for commercial operations in either Miami or Austin, but Argo has been testing fully driverless operations in both cities with employees since May.

A Lyft spokesperson told TechCrunch removing the driver would depend on safety performance data, an appropriate level of community acceptance and the regulatory environment.