A RARE pink sarcophagus has been discovered by archaeologists in Cairo’s famed Saqqara necropolis.

The granite coffin is up to 3,300 years old and belonged to a prominent politician who lived during the reign of King Ramses II.

The discovery was announced by the Egyptian Ministry of Tourism and Antiquities in a statement on Monday.

They said that the body of the “high-ranking official” inside was taken by grave robbers hundreds or even thousands of years ago.

That’s because its lid had been broken, indicating that it had been opened and looted, much like many tombs in the area, according to Dr. Ola Al-Ajezi, head of the archaeological team, from the Faculty of Archaeology, Cairo University.

The sarcophagus was found near the pyramid of King Unas in the Saqqara necropolis, near Cairo. 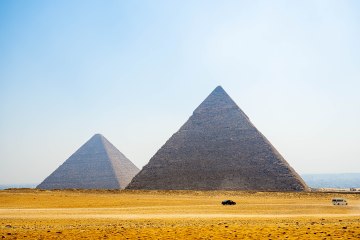 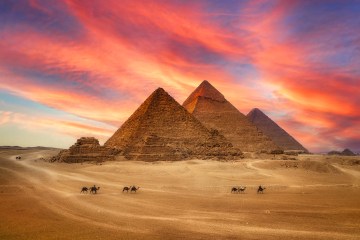 Nicknamed the “City of the Dead”, the ancient necropolis is thought to house the remains of thousands of people.

Carved from pink granite, the sarcophagus was decorated with the name of its owner, “Ptah-M-Wiah.”

According to the hieroglyphs inscribed on it, he managed a temple that Ramesses II had built in the ancient city of Thebes.

Those inscriptions sit alongside scenes depicting the songs of the Egyptian god Horus and a prayer to protect the deceased.

A likeness of Ptah-M-Wiah was carved into the coffin’s exterior and showed him holding a stone pillar associated with the god Osiris.

According to Egyptian officials, he supervised the temple’s livestock and was head of its treasury.

A respected statesman, he is also thought to have been responsible “for the divine offerings to all the gods,” the ministry said.

“What also makes this tomb unique is the area it was found in,” Dr El Aguizy told The National.

“A number of very important military leaders, statesmen and aristocrats were buried there, most of whom date back to the reign of Ramses II.”

Ramses II was the third pharaoh of Egypt’s 19th dynasty.

He is also known also as Ozymandias and as Ramesses the Great.

Ramses is known for his extensive building schemes and for the many colossal statues of him found all over Egypt.

The discovery of the pink sarcophagus could spark fears of the infamous “curse of the pharaohs.”

Some people believe that the legendary hex will affect anyone who disturbs the mummified remains of an Ancient Egyptian person.

This supposed curse is not said to differentiate between archaeologists and thieves and is said to cause bad luck, illness or even death.

It’s often connected to King Tutankhamun and the people who died after opening his tomb.

Scientists and archaeologists have repeatedly rubbished the claim, dismissing it as nothing more than an urban myth.

It was circulated thousands of years ago to discourage Ancient Egyptian thieves from raiding tombs of their many treasures.