Hardware’s long been a struggle for Google. Sure, the company has dominated many fields over the years, but it’s hard to shake the sense that it’s always harbored jealousy over what companies like Apple and Samsung have achieved on that front.

After some early struggles (and a sizable shakeup), Google’s hardware division started gaining some footing. Last year’s Pixel 6/6 Pro release was its biggest success to date, both in terms of hardware design and sales, selling more than the Pixel 4 and 5 combined, according to the company. Similarly, the Pixel 6a is on its way to redefining how a budget Android phone looks.

Now, it’s important to temper expectations here – sales are still a drop in the bucket, compared to larger players, but at the very least, the company finally seems to be on the right track (it’s another question entirely whether it will reach its destination in time).

Google’s earbud efforts similarly stumbled out of the gate. In the era of the AirPod, the first Pixel Buds arrived tethered in 2017, like a throwback from a different era. It took another two- and-a-half years, but the second-generation buds corrected many of their predecessors’ shortcomings. They weren’t perfect, so much as perfectly fine. 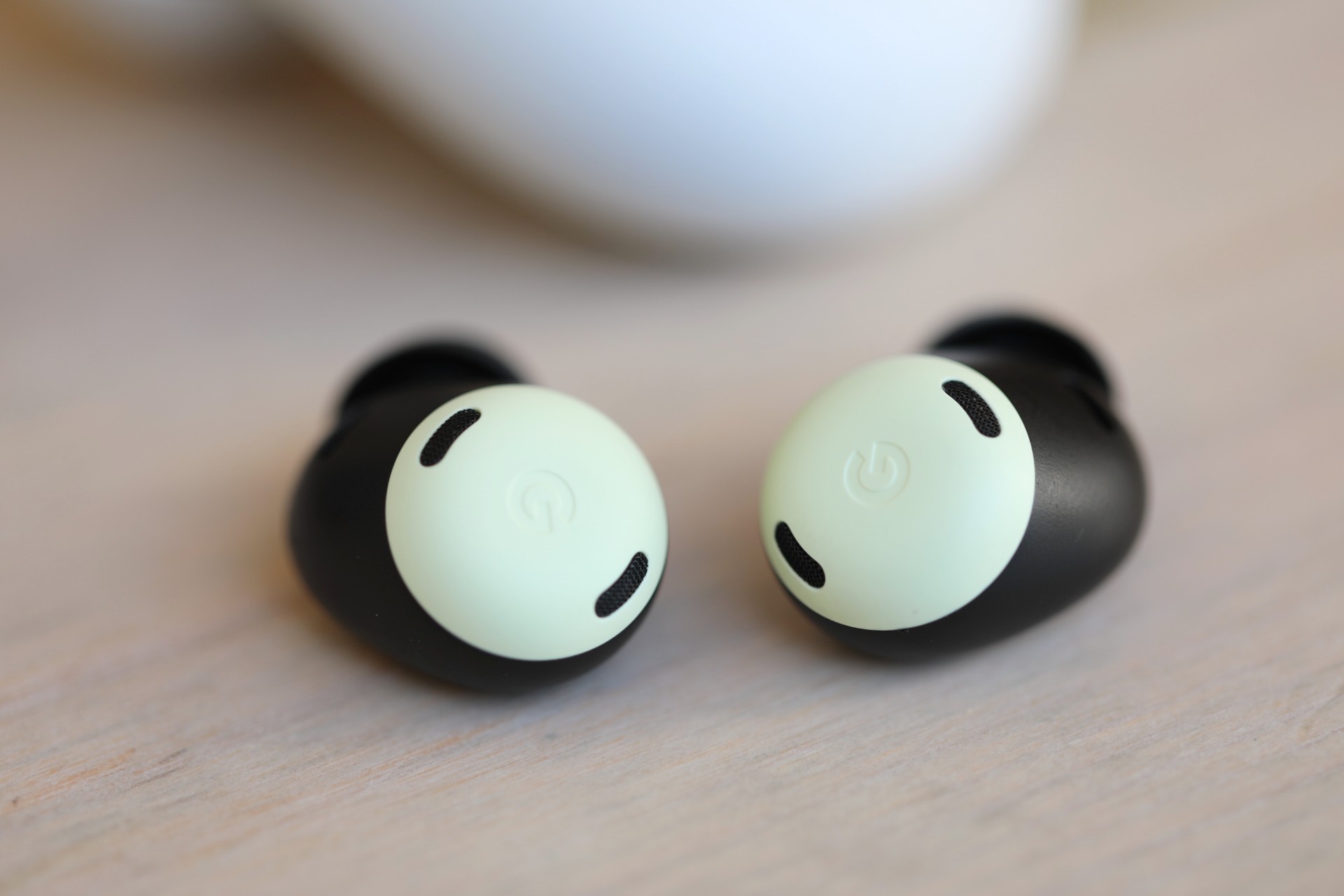 Last year’s A-Series, meanwhile, aimed to do what the company’s been largely successful in executing on the smartphone side: Trimming the product down to a core set of features at a solidly low price-point. Again, they were fine, though products like Nothing’s Ear (1) buds took some of the wind out of their sales with the same $99 price tag and a lot more features.

The new Pixel Buds Pro, meanwhile, take the line in the opposite direction. They’re double the price of the A-Series. That’s a sizable gulf, but roughly in line – and in some cases cheaper – than similarly positioned devices. Keep in mind, both the AirPods and Galaxy Buds started around $50 more expensive, though you can readily find them for significantly lower than that with a quick Google search.

The biggest points the $199 Buds Pro have over the $99 A-Series are as follows:

All welcome features – and stuff a $200 pair of earbuds really ought to have in 2022. That goes double for the addition of ANC, which, quite frankly, probably ought to be standard in non-pro earbuds at this point. I’ve been using the Pixel Buds Pro as my primary headphones for several days now, and can report that they’re perfectly fine – pretty much inline with its predecessors. They’re a nice upgrade over the A-Series and the two-year-old Pixel Buds. As a New York City dweller, I can definitively state that active noise canceling is one of those things you really miss when it’s gone.

I’m a real sucker for Sony headphones in general, and the Link Buds S are currently pick for $200 buds. They’re my daily driver (when I’m not testing out other companies’ sets), the gold standard for sound, comfort and noise canceling. I’d place the Pixel Buds Pro below Sony’s offering in all three categories, while pointing out that each of these things can be subjective.

As I’ve noted many times on these pages, the wireless earbud category got pretty good, pretty quick. As with smartphones, most buds from recognizable names are perfectly fine. Google may have taken longer to get there than most, but I would place the Buds Pro in that category. Companies tend to fine-tune their hardware products to work well together, and the general rule of thumb is that it makes sense to buy earbuds from the same company that made your phone. 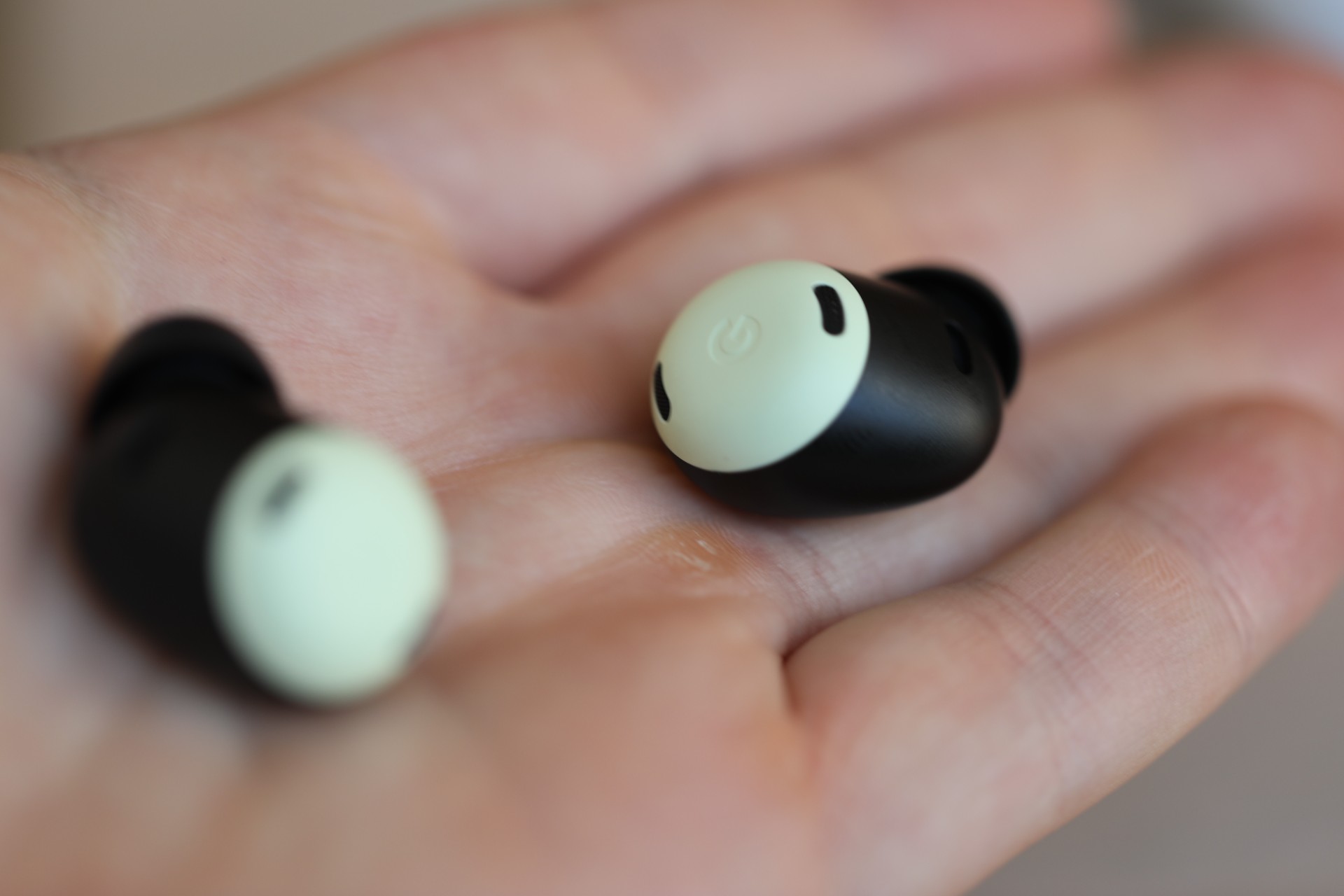 There’s certainly deeper integration with Pixel devices, baking the buds’ software into the smartphones’ settings. That said, it should work just fine with any device running Android 6.0 or later, beginning with the Fast Pair dialog box that pops up when you open the case. On a non-Pixel Android device, that interaction happens with the standalone Pixel Buds app. If you’re an iPhone user, meanwhile, you lose some of those key integrations, but can still use them like a regular pair of Bluetooth earbuds. Overall, I did experience more bluetooth dropouts on the iPhone vs. Pixel device.

Multipoint is a nice new feature – though it’s off by default. Once enabled, you can connect the headphones to two devices at once and switch between them. I set them up for the Pixel 6a and my MacBook. It took a bit of finagling to get the setup just right, but I’m glad I did. 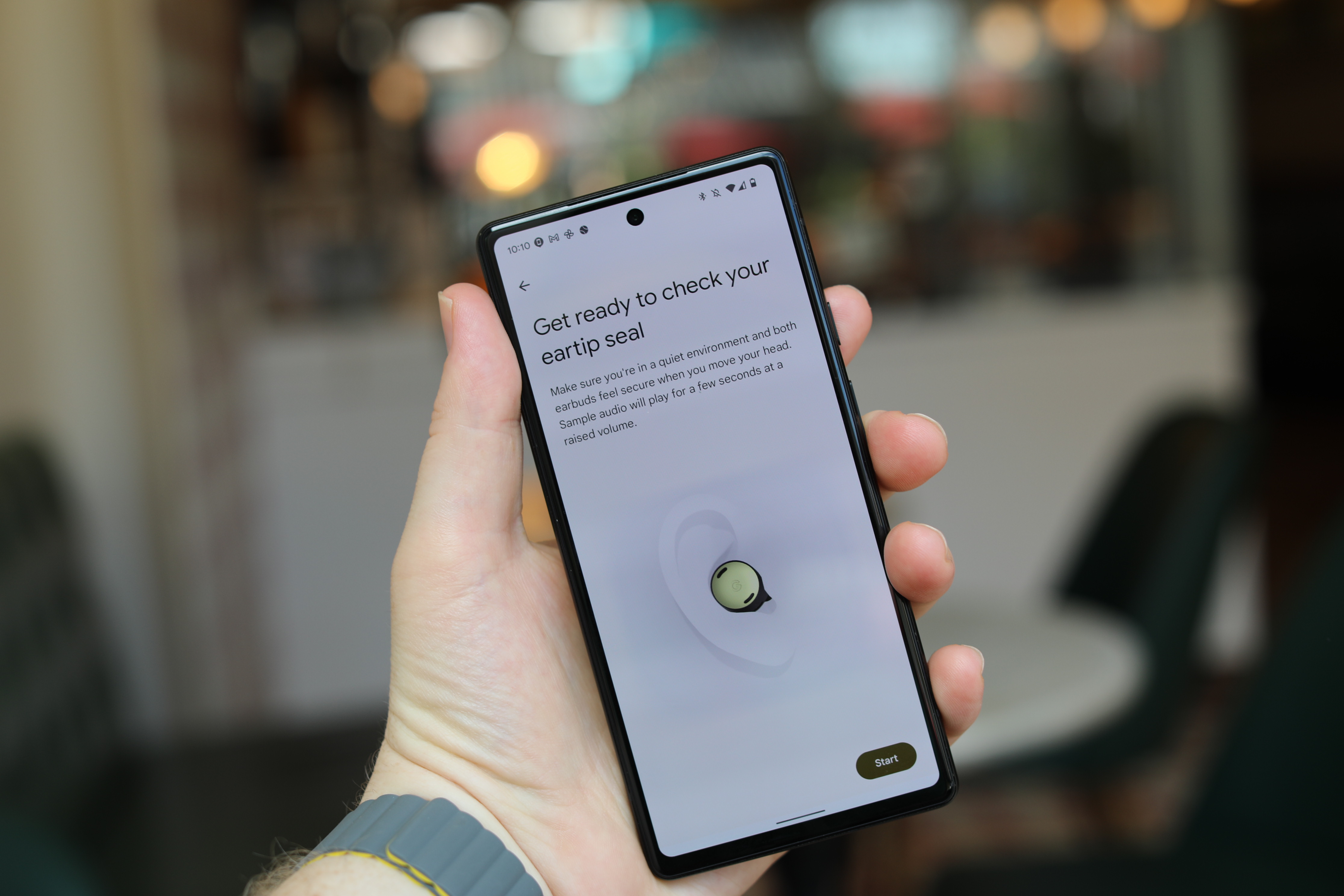 If you have two Android devices logged into the same account, meanwhile, you can enable Audio Switching to automatically move between connected hardware. After connecting, the app will walk you through a fitting process to make sure you’ve got a good seal, with minimal audio leakage. Mine seemed to fit fine out of the box – I suspect it’s not nearly as sensitive as, say, Nura’s fitting process.

Design-wise, the buds share a lot of common DNA with their predecessors, though they’re notably larger and heavier than the A-Series. They’re not going to break your ears, but Google’s added a fair bit of length to the design and 1+ grams to the weight of the buds/~10 grams with the buds and case combined. I found them reasonably comfortable – albeit less so than Sony’s. The right bud strained my ear a bit after a long listening session.

They stay in place well, though I had to adjust them a bit while running (this is the case with most non-sport focused buds, mind). I found it very difficult to do so without accidentally triggering the touchpad and accidentally pausing or advancing the track. This is a combination of touch sensitivity and surface area. It’s a hard thing to get right and precisely why companies like Apple, OnePlus and Nothing rely on stem clicks. 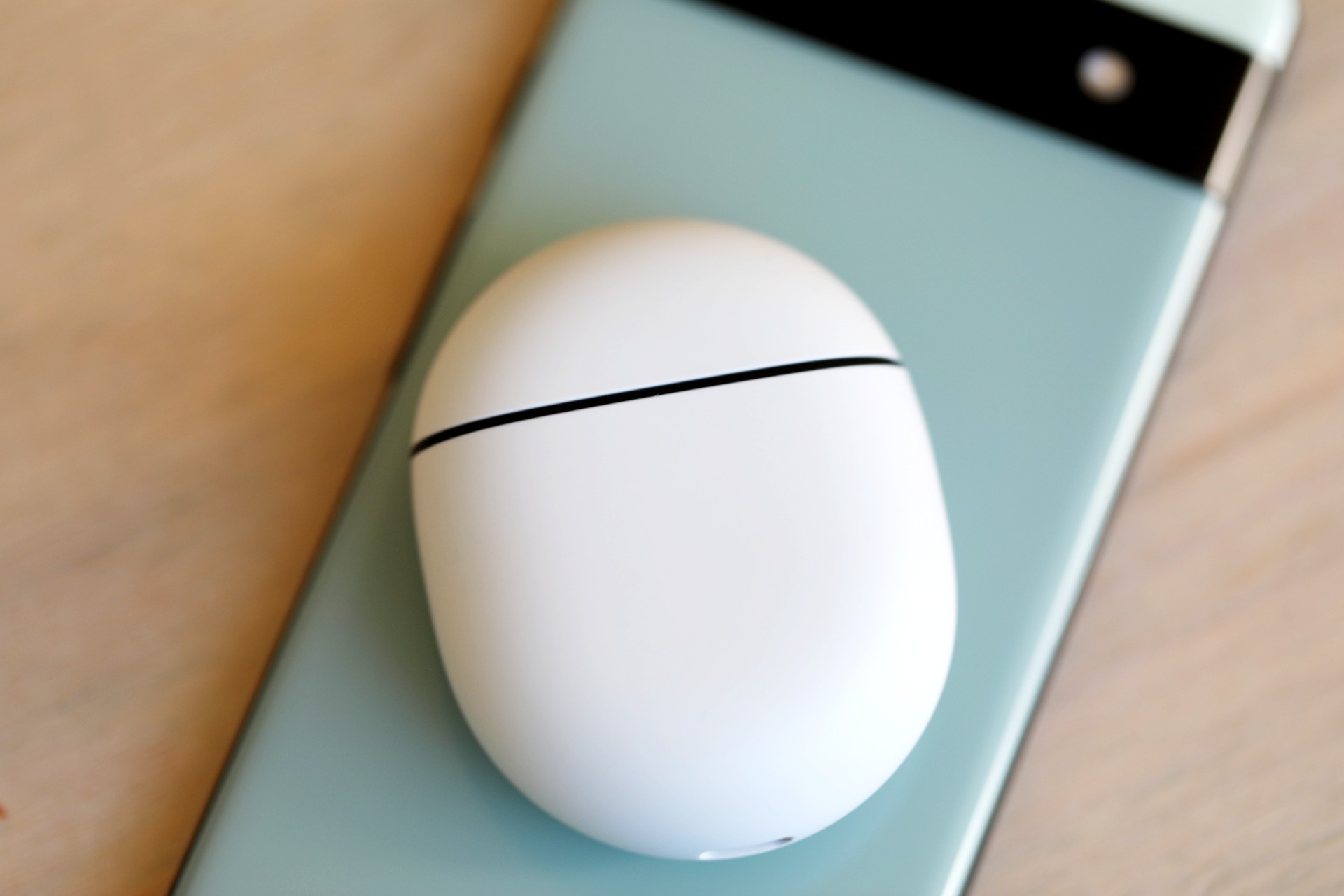 Call quality is sharp, and sound is an improvement over previous generations. Anyone who’s looking for good sound quality above all, I’d point you in Sony and Nura’s direction, but for day to day music streaming and podcast listening, these do the trick fine. Likewise, active noise canceling does okay with ambient sound, but some is invariably going to get through here. Google is also following Apple down the spatial audio headtracking route later this year. I’ve yet to be convinced it’s more than a novelty, though it also finds companies readying themselves for an augmented audio future.

The headphones are IPX4 water-resistant, which is more than enough to survive sweat and a freak downpour. The IPX2 case should fair well on that front. The case sports wireless charging compatible with the Pixel 6’s Battery Share feature (that’s one of the pieces the company dropped to bring down the price on the 6a). The buds’ battery is rated at 11 hours with ANC off and seven with it turned on, putting them at the higher end of that spectrum. Factoring in the case brings you up to 20 hours. 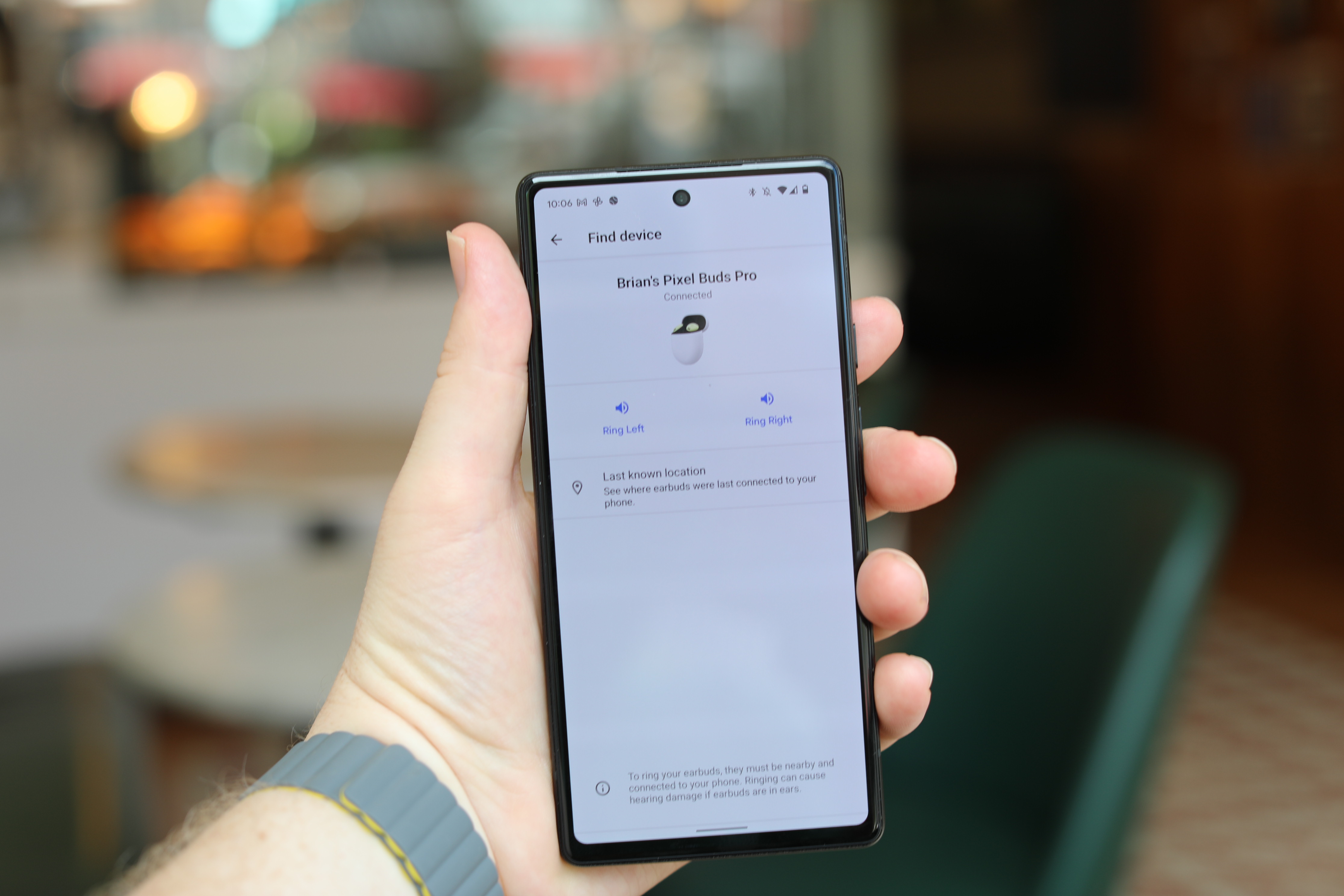 Other nice software features are on-board, like Find My Device, which will either place them on a Google Map or emit a chirping sound from the bud, if you’re sure they’re in the same room. I recently lost a single bud from a competitor without this feature and it really ruined my day. 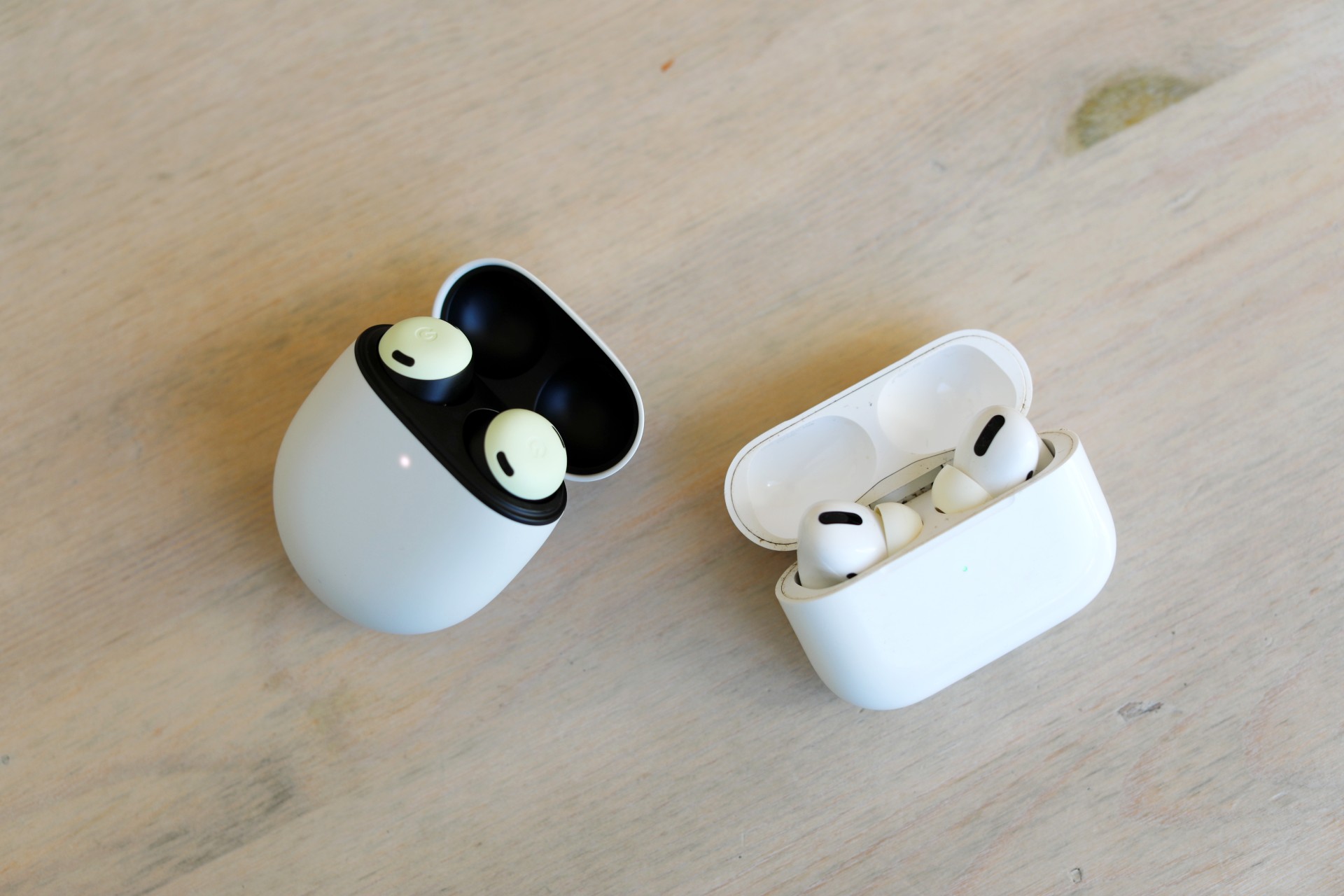 Like the last few Pixel Buds, there’s not a lot to complain about here – nor is there a ton to recommend them over the competition. It’s not hard to image the Pros really impressing, had they arrived on the scene a few years ago.

As it stands, however, they mostly bring the company up to speed with competitor models that have been out for a while now. If you’re a Pixel phone devotee looking for a pair of compatible buds, by all means, go for it. Just don’t expect to be wowed.